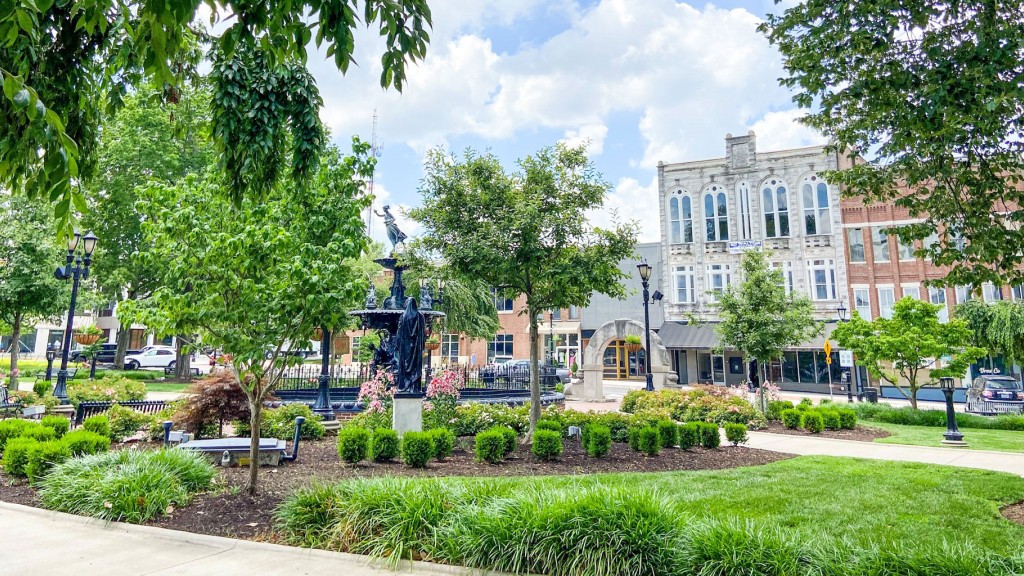 Kentucky. Downtown Bowling Green. Norman Rockwell eat your heart out. This is what America used to look like before we started building Olive Gardens.

I’m visiting town. Taking in the views. Main Street is perfect. There’s a pub on East Main. Pabst Blue Ribbon signs in the windows. The joint is doing pretty good business on a weeknight.

The Capitol Theater sits next door. The marquee bears a neon sign advertising a performer nobody’s ever heard of before.

A water tower stands guard over the city, painted like an American flag. Stars emblazoned on top. Stripes on the side.

As a young man, I hadn’t seen much of America. I was a hick. I had been nowhere. Done nothing. Experienced little. Never traveled.

I was the guy in the bar who sat beside you as you told the bartender about your recent church mission trip to Honolulu.

You would have seen me staring silently into my Pabst as you described the greatest tourist attractions on earth. Meantime, I’d be feeling like the world’s biggest loser. Because I hadn’t traveled anywhere of note, unless you counted Texarkana.

I didn’t come from world travelers. I came from blue collars. Ironworkers. Dropouts. I grew up in hand-me-down clothes. My mother reused her teabags. I inherited my older cousin’s underpants.

All my college-age friends, however, were hellbent on traveling. They were obsessed with seeing Europe. It was all they talked about. Spain this. France that. Italy, Italy, Italy.

Not me. My family was so broke that, for dinner, we went to KFC just to lick other people’s fingers.

Moreover, I didn’t really care about seeing Europe. Oh, I’m sure it’s great. But there was way too much of America I wanted to visit first.

As clichéd as it sounds, I have always been crazy about America.

When I was a teenager, I bought a set of “National Geographic” hardbound books from a garage. Deluxe set. Circa 1959. Each volume featured a different U.S. state.

I lived inside those books.

Those books created an urgency within me to see my own country at eye level. I wasn’t interested in Rome. Nor Berlin. You can have Europe. You can keep your leaning tower of Pisa. I wanted to see the Home of the Brave.

I wanted to stay in a Wigwam Motel in San Bernardino. I wanted to eat crabcakes in Baltimore. I wanted to take a riverboat cruise on the Mississippi.

See dawn in Yosemite. Watch a game at Fenway. Walk the Golden Gate. I wanted to visit Austin, Texas, someday, and touch the hem of Willie’s bandana.

Sadly, I haven’t done any of those things. But I’m not complaining. Because since starting this column ten years ago, I’ve done some cool stuff.

Namely, I have seen parts of this country a lot of people overlook. I’ve met some pretty incredible people.

I’ve seen things that make me so overwhelmingly proud to be American it hurts. Such as the scene I saw yesterday.

I was in an interstate gas station, outside Bowling Green, waiting in line. A little girl was entering the convenience store. The girl was using forearm crutches. She had a hard time walking. Cerebral palsy, maybe.

She stumbled and fell onto the pavement. She was bleeding, but not badly.

Within moments, there were six truckers gathered around the girl. They placed her onto a bench. First-aid kits were invoked.

I wish you could have seen it. Six roughneck blue-collars stood around a child, trying sincerely to make her laugh. Anything to get her mind off the pain. At one point, one of the older men even started singing “There’s A Hole In My Bucket.”

When it was all over, I asked the men why they had helped this girl. Why did they even bother?