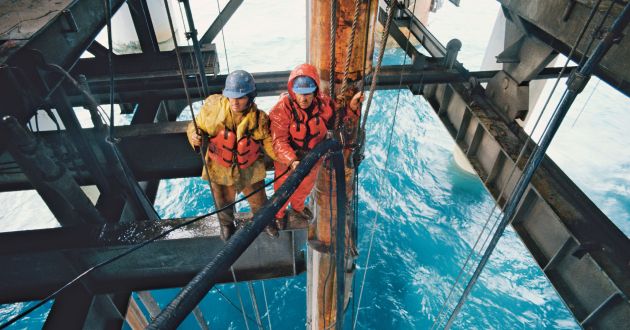 Multiple staff have told the Herald on Sunday how over 50 seafarers out of around 250 on the deepwater construction vessel owned by Dutch-based Heerema Marine Contractors have been told since Thursday that they are being let go in the next week with mainly Malaysian workers replacing them.

Now overseas-based contractors working on the huge £2 billion Neart Na Gaoithe (NnG) offshore wind farm project in the Firth of Forth off Fife have been told that the staff are being advised not to leave the vessel in protest.

Staff who have been told to go, who include UK-based marine staff, welders and riggers have varying lengths of contract who have only been on the vessel for a matter of weeks and recruited in anticipation of the concession ending on October 31.

Now after the concession was extended yet again to April, next year, UK workers have been given a matter of days notice over the termination of contracts – many of which were due to expire at the end of December.

The Herald also confirmed that at least 36 predominantly British crew on another vessel recruited in anticipation of the concession ending have been given their marching orders in the wake of the extension to be replace by workers from the Philippines.

Those workers were employed on the Normand Navigator, a Norway-registered key supply ship owned by Solstad working on the NnG project.

Protests have now gone out to Heerema and Italy-based Saipem, which is overseeing the installation of turbine jackets in the project.

One sent by a legal representative for some of the workers seen by the Herald on Sunday says that seafarers had been subjected to “totally unreasonable and unjust termination” of contracts “without any explanation nor valid reason” and that they are being advised to conduct a sit-in and not to leave.

“The seafarers signed contracts and were led to believe they are signing contracts till the end of the project,” the message stated.

It said that because of the “complete failure” to resolve the issue seafarers had been advised to continue working as normal past their notice of termination expiry date and until their contracted sign-off date.

The message to bosses states: “We urge you to immediately reverse the decision and let contracted personnel finish their contract as agreed at outset.

“This will not go away but escalate and backfire as seafarers intend to take the matter to the media and/or court if necessary.”

It is understood that many of the staff were put on notice on Thursday and on Friday that they will leave on Tuesday.

After the mutiny warning was lodged on Friday some workers were told they were to get an “unexpected” up to two weeks paid notice by way of compensation.

In response to the staff mutiny warning, Toby Brown, contract recruitment director of Airswift, who act as recruiters for the Balder vessel responded in an email: “In accordance with the seafarers’ signed contracts, the contracts may be terminated subject to 15 days’ notice. This notice has been given to the seafarers.”

A number of staff spoke to the Herald on Sunday about their concerns but wished to remain anonymous for fear of being blacklisted.

One axed Scots father-of-three who has only been on the vessels for three weeks said some workers were told they have to finish on Tuesday, while others have to go the following week.

He believes the concession extension will give companies time to give cheap foreign workers visas.

A number of staff spoke to the Herald on Sunday about their concerns but wished to remain anonymous for fear of being blacklisted.

One axed Scots father-of-three who has only been on the vessels for three weeks said some workers are being told the have to finish on Tuesday, while others have to go the following week.

He believes the extension will give companies time to give cheap foreign workers visas.

“It is shocking that the Scottish Government is not seeing what is going on here in their waters. This is supposed to a Scottish green landmark, the green revolution. But it is all about having cheap labour.

“I don’t know why questions aren’t getting raised at the highest level. Why was this concession there in the first place. We have young lads chucked jobs to come here.

“They will get in Malaysians and, don’t get me wrong, they are very very nice people, you cannot fault them. The are capable of doing the job. But they are cheaper.”

National Union of Rail, Maritime and Transport Workers sources a British deck hand would normally be paid £18 to £20 an hour but have been replaced by cheaper Asian workers.

Solstad say their crew salaries are in line with at least the national minimum wage which is at £9.50 an hour.

Mr MacAskill who has lodged concerns about the status of British offshore workers with the Home Secretary Suella Braverman, Scottish energy secretary, Michael Matheson said the issue had create another injustice alongide the “shameful” sacking of UK seafarers by P&O Ferries.

In March, P&O Ferries immediately fired 800 seafaring staff by Zoom with concerns that they were to be replaced by cheaper mainly foreign agency crew.

“It’s absurd that the actions of P&O in sacking UK seafarers and replacing them with low wages foreign crews are being closed down by the transport department. Yet the Home Office is allowing this in UK waters. There’s no labour shortage requiring foreign skills. This is perverse and must stop,” he said.

Another axed worker from the Balder, who wanted to remain anonymous for fear of being blacklisted told the Herald on Sunday: “It is the case whereby in UK waters, after the Brexit shambles the government is making it worse for British seafarers in general for getting jobs.

“I turned down other contracts to accommodate this position, and as such, I will now have a major loss of earnings, just before Christmas festive season.

“Seafarers spend more than half their lives at sea, trading goods, providing oil, gas and renewable energy to the UK and in turn, strong revenue.

“But this extension granted for foreign workers to continue working in the UK offshore sector without visas does not help UK seafarers in any way.”

Another worker told his contract had been ended early said: “My concern is If I need to go abroad for work, there are all sorts in place I need to get through to get a working visa, plus now we are out the EU, it is much harder because they don’t want to give us jobs. But it is easier for them to work over here.

“From the cost of living hike, the government just seem to be screwing the British workers. It is a total disgrace.”

Unions have been fighting the OWWC which allows companies to skip the usual post-Brexit immigration restrictions and employ foreign nationals to join vessels engaged in the construction and maintenance of offshore wind farms.

The immigration minister has said the door will be shut on the “scandal” of allowing cheap foreign labour to replace British workers.

He said the OWWC which allows the employment of cheaper foreign nationals on wind projects will close on April, 2023.

But industry insiders have questioned the UK Government’s position, pointing to the number of times the OWWC has been extended.

Originally introduced in 2017, the government has renewed the ‘temporary’ concession multiple times starting with a 12 month extension to April 21, 2020. In 2021 the extension was done with no warning, on the day after it expired.

A deadline was put in place on July 1, 2022 only for it to be extended to October 31 before being put back even further till April 30, 2023. It is feared that this has now laid the door open for the continued use of cheap foreign workers.

It comes as demand for offshore wind staff is expected soar with the industry council saying the sector staffing is expected to more than treble to 100,000 by 2030 and experts says it is typically heavily reliant on foreign national talent. A third of the jobs are in Scotland.

The decision by the UK government to extend the concession comes after concerns by some in the industry that offshore wind farm operators would struggle to maintain operational continuity due to a shortage of skilled and qualified staff.

The Herald revealed earlier that workers on Normand Navigator were given their marching orders by recruiters ESRG on the very day the contract was due to start and they were due to join the vessel.

ERSG, who act for Solstad said in a notice of termination dated November 8 sent to staff on Normand Navigator that the firm informed them that they wish to terminate the employment agreement “prior to its start on November 8 because the requirement for workers has changed. This is the result of the extension by the UK government of the Offshore Wind Workers’ Concession.”

The concession currently in place, outside of the UK’s Immigration Rules, allows the employment of foreign workers who are joining vessels engaged in either the construction and maintenance of offshore wind projects in UK territorial waters (UKTW) – a 12 nautical mile zone from the mainland.

To determine whether a migrant worker will require a UK work visa – typically, a sponsored visa under the points based system – employers would usually need to consider whether work is undertaken wholly or mainly within UKTW, or beyond on the UK Continental Shelf (UKCS). The employer would also need to consider whether any migrant worker forms part of any seafaring crew.

But deciding whether sufficient time is being spent in UKTW so as to require a work visa is fraught with complexities.

The UK offshore wind workers concession removes that uncertainty over whether or not sponsored work visas are required or available for the relevant job roles. It also removes the associated costs, compliance and process aspects of sponsoring foreign nationals to work on an offshore installation located close to the UK.

When the concession was extended last year, WindEurope said: “It gives businesses breathing space to adjust to post-Brexit realities. This ensures a reliable energy supply and an orderly expansion of wind energy in UK waters.”

A Home Office spokesperson said:“The government is committed to promoting job opportunities for local labour and always encourage employers to look to the domestic workforce first.

“That’s why we are closing the offshore wind concession after it expires in April 2023, and will put measures to do so in effect shortly”.

Heerema, NnG and Saipem have all been approached for comment.